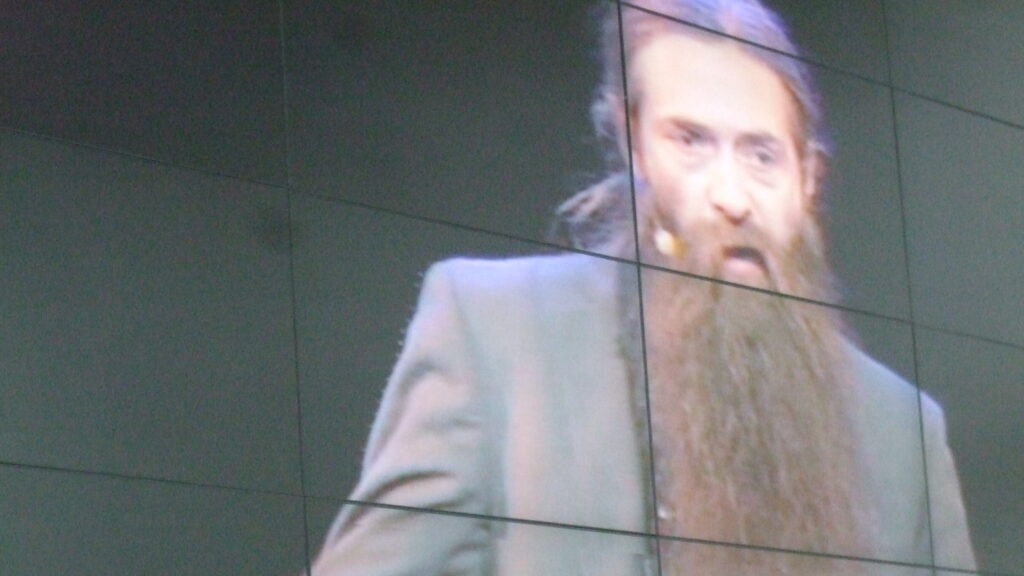 Aubrey de Grey, the jet-setting gerontologist who co-founded the SENS Research Foundation to discover ways to reverse the ravages of aging, has been placed on leave by the foundation after being accused of sexual harassment by two prominent entrepreneurs in the field of healthy life span extension.

On Tuesday night, Laura Deming, the 27-year-old founder of the Longevity Fund, and Celine Halioua, the 26-year-old founder and CEO of Loyal, a biotech startup developing drugs to help dogs live longer, posted accounts on their blogs and to Twitter of experiences they had with de Grey as young scientists trying to gain a foothold in the field.

De Grey denied the allegations in a post on Facebook, and SENS issued a statement saying he had been placed on leave pending the outcome of an investigation.

After learning of the allegations Wednesday, a journal said it had removed de Grey as its editor-in-chief.

Halioua, who had been an intern at SENS Research Foundation in 2016 and whose research as an undergraduate and graduate student had been funded by the organization, alleged that SENS executives exploited her youth and attractiveness to solicit funds from donors. Halioua described a dinner in which de Grey allegedly told her that she had a responsibility to have sex with the SENS donors in attendance so they would give money to the organization.

“I left that dinner sobbing,” she wrote. “It has taken me years to shake the deep-seated belief that I only got to where I am due to older men wanting to have sex with me.”

In her own post, Deming described an encounter she had a decade ago with de Grey, in which he told her over email that he had an “adventurous love life,” and expressed a suppressed desire to talk about it with her. Deming was 17 at the time, and had known de Grey since she was 14 and a precocious freshman at the Massachusetts Institute of Technology.

Deming said she dismissed the experience as a mistake on de Grey’s part. But in recent months, conversations with Halioua and others had convinced her the behavior was part of a serial pattern of predation on younger women. “I’m angry to realize that Aubrey inappropriately propositioned more than one woman over whom he was in a position of power, many in the community knew about it, and no one did anything,” she wrote.

Lisa Fabiny, the acting executive director at SENS, said in an emailed statement to STAT that the organization was first made aware of the allegations brought by Deming and Halioua in late June. In response, she said, it hired an independent third party to investigate these claims, and placed de Grey, who also serves as SENS chief science officer, on administrative leave.

“We respect the integrity of this investigative process, and it would not be appropriate to speculate on the outcomes while the process remains ongoing,” she wrote. “We can promise that we will take seriously the findings and, if appropriate, take decisive action. We cannot and do not condone behavior that makes our colleagues and members of our scientific community feel victimized, targeted, or harmed.”

Asked to identify the investigator, Fabiny would only say it is someone who specializes in these kinds of investigations.

Early Wednesday morning, de Grey addressed the allegations in a Facebook post. “Unsurprisingly, I deny these allegations,” he wrote. “What may be more surprising to you is this: my belief is that both Laura and Celine have been deceived into the view that I have done many things that I have in fact not done.”

In the post, De Grey said that the women’s descriptions of their personal experiences were “decidedly incomplete.” Deming “references an email I wrote — inadvisedly, for sure, and which I unreservedly regret — to her when she was 17, but she explicitly states that ‘I wrote it off as a mistake’ and that she only resurfaced it in the past few months at the instigation of others,” he wrote. “Celine references a dinner where she and I sat together, and accuses me of saying certain things that I utterly deny ever saying and that she implies I said when she was drunk. … It is instructive that the very next day she wrote to me without the faintest hint of ambivalence, asking for additional feedback on her presentation, and that every one of our exchanges, of which the most recent was less than a year ago, has been of similarly untarnished character.”

De Grey went on to suggest, rather cryptically, that someone else was using the two women to hurt him. As to whom that might be? “I have been vigorously advised to keep my counsel on that question for another day or two … but, as they say, watch this space,” he wrote.

De Grey, originally from England, has found a fertile home in Silicon Valley for his ideas that aging could be engineered. Starting in the mid-2000s, powerful backers from the tech world, including entrepreneur Peter Thiel, began funneling millions of dollars to de Grey’s pursuits, first at the Methuselah Foundation, and later at SENS, which is located in Mountain View, Calif.

De Grey’s influence extends beyond his foundations, and the research and pharmaceutical companies that they fund. He also serves as a scientific advisor to a handful of startups, including Rejuveron, VitaDao, Maximon, and Yuva Biosciences. Another company he advises, BioViva, claimed to have been conducting experimental offshore gene therapy trials to treat dementia, a recent STAT investigation found.

De Grey was also the editor-in-chief of Rejuvenation Research, a somewhat fringy journal devoted to advances that may help slow or reverse the aging process. A journal spokesperson emailed STAT Wednesday afternoon to say de Grey had been removed from his position effective immediately.

In an interview, Hailoua told STAT that she and Deming made the decision to come forward entirely on their own. “I’m not being forced or compelled by a third party,” she said. “This has been on my mind for a while and I wish I could have done it in collaboration with SENS, but it became clear we couldn’t after we gave them multiple months to show action.”

In her post, Halioua alleged that another, unnamed SENS executive harassed her and claimed that early this year, the SENS board was “brought testimonies of other women,” including of physical sexual abuse. ​​“SENS did not act,” she added. “Only after Laura and I came forward two months ago did SENS initiate an internal investigation.”

Asked to respond, Fabiny said, “No other allegations were brought to SRF management and no other employees of SRF have ever been accused of sexual misconduct.”

SENS and de Grey are potent fundraisers for anti-aging research, and in her post, Halioua accused the organization of recently raising at least $25 million without disclosing the investigation.

“Every dollar that goes to Aubrey holds back the field, both directly — by diverting it from fruitful aging research — and indirectly, by giving Aubrey the power to destroy the next aging leader before she emerges,” Halioua wrote. “I will no longer participate in any event that also involves Aubrey or SENS, and will consider any group that continues to give Aubrey a platform (financially or otherwise) as complacent in the sexual harassment of minors and students.”

For Deming, the decision to come forward was a difficult one, she said in an interview. De Grey was an early mentor of hers and someone she told STAT she still has no desire to hurt personally. “All I want is for a young woman not to have to meet people and think that this is the norm, that the culture in the longevity field supports this stuff,” she said.

The reason she didn’t report her concerns earlier is that she believed that the way you show you’re competent in a field dominated by older men is to keep your head down and not complain. But she sees now that that strategy made it easier for de Grey to have what she now describes as inappropriate relationships with the next generation of female longevity researchers. “I trusted Aubrey when I was a kid to give me information about norms in the field,” she said. “Now I know that there are a lot of great people in the field who don’t view those behaviors as acceptable.”

After this article was published Wednesday, a member of the SENS research advisory board resigned in protest. In a letter of resignation he shared with STAT, Fyodor Urnov, a professor of molecular and cell biology at the University of California, Berkeley, wrote that he found the behavior described “reprehensible and absolutely unacceptable,” and urged a full and rigorous investigation. “What benefit can there be from a life lived longer if it is lived amorally?” he wrote.

This article has been updated with comments from Halioua and Deming and additional developments.