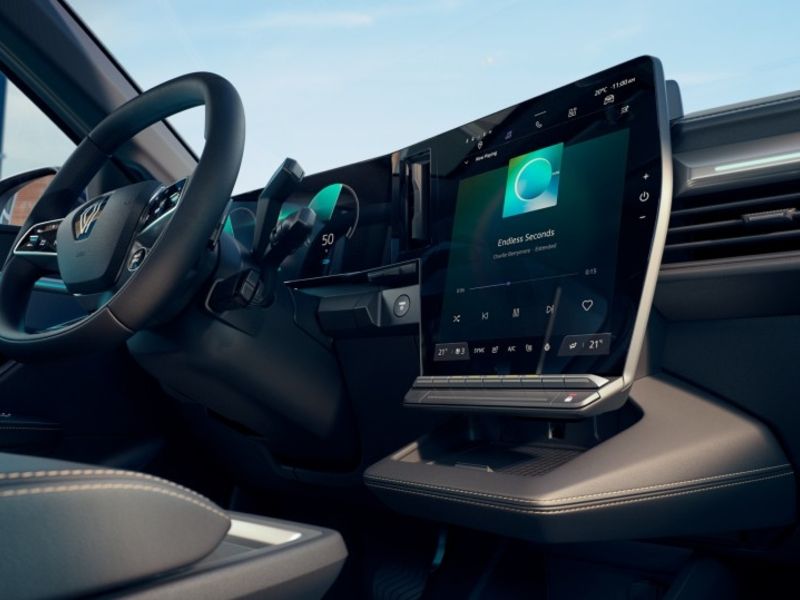 MUNICH — Renault says the new Megane E-Tech Electric compact SUV is the first mainstream car to use the Android Automotive operating system, building in the look, feel and functionality of an Android smartphone.

Navigation duties are handled by Google Maps, which appears on a 12-inch-by-12-inch touch screen (lower-end versions get a 9-inch-deep screen with the same functionality). Directions can be entered using Google Assistant voice recognition; and there are more than 40 apps such as Spotify available on the Google Play Store, which users can download directly to the car.

“This screen is the masterpiece of the new Megane’s cockpit,” Renault chief designer Gilles Vidal said Monday at the Munich auto show. “By partnering with Google Automotive Services, we have been able to provide accessible and user-friendly apps.”

Renault Group CEO Luca de Meo said the Open R Link was the “real gem” in the new Megane, noting that 75 percent of the world’s smartphones run on the Android system.

Android Automotive is an operating system that runs directly on the car’s in-vehicle hardware, in this case a third-generation Qualcomm Snapdragon automotive cockpit platform that uses AI to improve voice recognition and safety use cases.

Android Auto, in contrast, runs on the user’s smartphone and is projected over the vehicle’s infotainment system with a USB connection. Apple phone users can connect to the Megane’s screen using Apple Car Play, which works the same way as Android Auto.

Android Automotive is currently used to drive infotainment systems in two production vehicles, the Volvo XC40 Recharge EV and Polestar 2 EV. It is set to appear on future GM models, starting with the revived Hummer brand and the Cadillac Lyric, and both Stellantis and Ford have announced that future models will use the operating system.

Other automakers, such as BMW, Mercedes-Benz and Tesla, are developing their own operating systems. But Android Automotive is an off-the-shelf, open-source system that lets automakers customize it to their needs.

In a demonstration of the OpenR Link system at the Munich auto show, Google Assistant voice commands — activated by saying “OK Google,” with a steering wheel button or with a screen icon —  could be used to play music on Spotify, change the climate-control system and call up the state of the Megane’s battery charge. Map directions included the nearest available and compatible charging stations.

Zoom-in and zoom-out using finger gestures was as fast and as seamless as on a phone.

Updates to the system are over-the-air, with users able to schedule them at night, just like a smartphone. Some of the apps come with driving restrictions or modifications. Widgets can also be added to the home screen.

Renault corporate design director Laurens van den Acker said OpenR Link is one of the new Megane’s key features. “In the end, [smartphones are] what people use in their cars,” he said in an interview with Automotive News Europe. “You could forget your smartphone at home, and you’ll still have all your apps from Google in the car. People will find the same digital environment in the car as they have at home.”