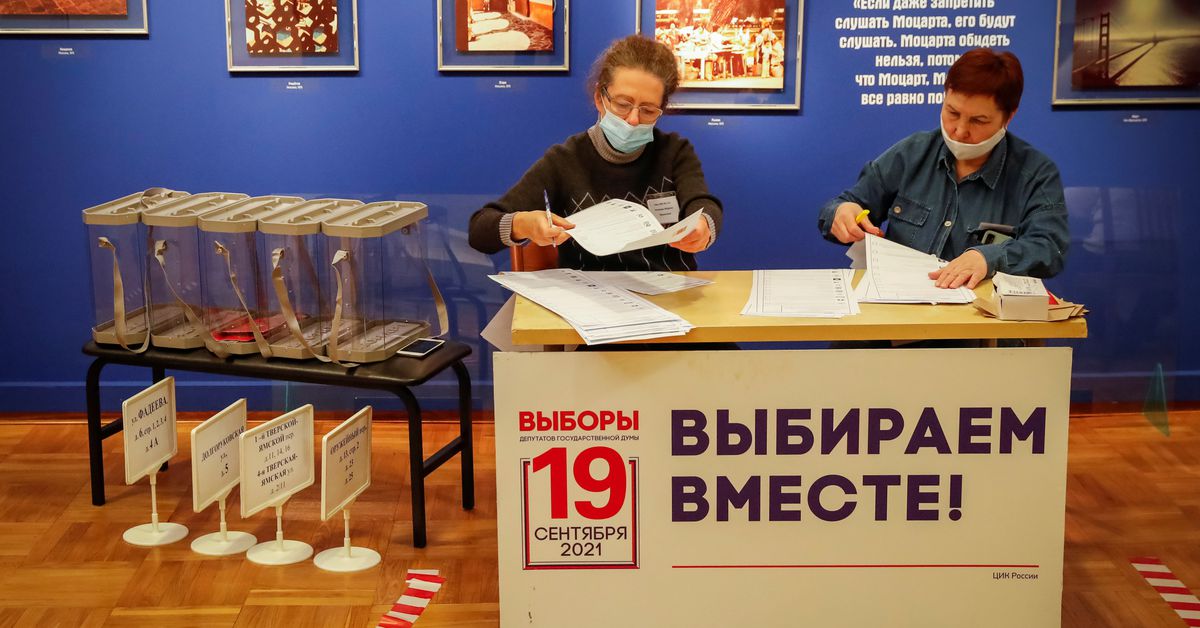 MOSCOW, Sept 17 (Reuters) – Russian opposition activists accused Alphabet’s Google and Apple of caving to Kremlin pressure on Friday after the U.S. tech giants removed an anti-government tactical voting app from their stores on the first day of a parliamentary election.

The app, devised by allies of jailed Kremlin critic Alexei Navalny, gives people detailed recommendations on who to vote for in an effort to thwart the ruling United Russia party which supports President Vladimir Putin.

Members of the upper house of parliament met Google (GOOGL.O) and Apple (AAPL.O) representatives in the run-up to the election to tell them to remove the app, or face consequences including fines and criminal prosecution.

John Sullivan, the U.S. ambassador to Russia, was also called to the foreign ministry before the vote to hear complaints that the companies’ behaviour amounted to U.S. meddling in Russia’s internal affairs.

A court outlawed Navalny’s political movement as extremist in June, backing complaints from Moscow’s prosecutor that its activists were trying to destabilise Russia, a ruling condemned by the West at the time as a blow against freedom.

Google decided to remove the app after being told its local staff could otherwise face jail time, one person familiar with the situation said on condition of anonymity.

Apple and Google did not immediately respond to requests for comment.

Russia has for years sought sovereignty over its segment of the internet, where anti-Kremlin politicians have followings and critical media operate.

Leonid Volkov, an ally of Navalny, accused Google and Apple of buckling under what he described as a Kremlin campaign of blackmail.

“This shameful day will live long in the memory,” Volkov, who is based outside Russia, said on the Telegram messaging service.

Ivan Zhdanov, another Navalny ally who is abroad, called the companies’ action “a shameful act of political censorship.”

Kremlin spokesman Dmitry Peskov said Moscow welcomed the move and that the U.S. companies had acted in the “spirit and letter of (Russian) law”.

Reuters independently verified that the app was unavailable on Apple’s AppStore and Google Play for Russian users. Previously downloaded versions of the app were not working.

The move is not a knockout blow for the Navalny camp’s tactical voting campaign. His allies published detailed lists online two days ago of how they want people to vote. read more

Some activists also use virtual private networks to skirt restrictions and were still able to download and use the app.

State communications regulator Roskomnadzor has demanded that Apple and Google remove the app, and threatened fines for non-compliance. read more

The election, which runs until Sunday evening, is a test of Putin’s grip on power during a malaise over faltering living standards and when ties with the West are bad.

United Russia faces a ratings slump but is expected to win the vote, which follows the biggest crackdown on the Kremlin’s domestic political opponents in years.

The election is the first in Russia to use electronic voting widely. A government ministry said the system had been hit by denial-of-service attacks carried out using foreign IP addresses from the United States, Germany and Ukraine.

The vote is seen as a dry-run for the presidential election due in 2024. At stake is United Russia’s super majority in the 450-seat State Duma, which last year helped Putin ease through constitutional reforms that allow him to run for office again and potentially stay in power until 2036.

Putin, who turns 69 next month, has not said whether he will seek re-election. He has served as president or prime minister since 1999.

Navalny, 45, was jailed in March in a case he called trumped up after recovering from a poisoning with a Soviet-style nerve agent.

His allies were barred from running for office because of their association with Navalny’s network. read more

The Kremlin denies any politically driven crackdown and says individuals are prosecuted for breaking the law.