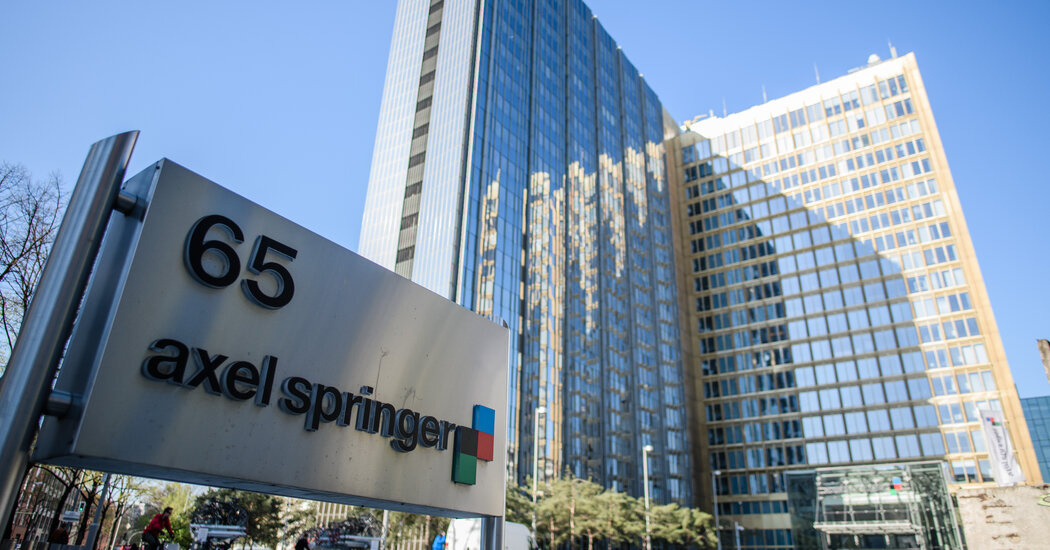 Politico, the Washington news site that has prospered for years as Beltway professionals gobbled up its scoops and inside-baseball-style reporting, will have a new owner.

The German publishing giant Axel Springer agreed to buy Politico in a deal announced on Thursday that could shake up the Washington media scene.

Springer will take control of Politico and its sister site, Politico Europe, as well as Politico’s tech news site, Protocol, a relatively new venture, the companies said. The deal, expected to close by the end of the year, is valued at more than $1 billion, two people familiar with the matter said. The New York Times reported last week that Politico’s owner, Robert Allbritton, was seeking $1 billion for the deal. The companies did not disclose financial terms.

Mathias Döpfner, the chief executive of Springer, described Politico as an “outstanding media company” that has “disrupted digital political journalism.” He added the importance of maintaining Politico’s “editorial independence and nonpartisan reporting.”

Mr. Allbritton, who helped found Politico in 2007, will remain publisher of the site and it will operate separately from Springer. “I reach this milestone with a sense of satisfaction that I hope is shared by every Politico,” he said in a statement. He also took a jab at others in the digital media space: “We have put the emphasis on doing rather than boasting, and what multiple competitors have aspired to — a consistently profitable publication that supports true journalistic excellence — we have achieved.”

Mr. Allbritton and Springer had been in talks for several months over a possible acquisition, said the people, who spoke on condition of anonymity because the talks were private. Politico, which generates about $200 million a year in revenue, has been consistently profitable. The site is free, and its flagship newsletter, Playbook, is widely read among Washington’s power brokers. It also has a high-end subscription service, Politico Pro, that generates more than half of the company’s annual revenue.

With a value of more than $1 billion, the deal is one of the most expensive media mergers in recent memory, the equivalent of five times Politico’s yearly sales. BuzzFeed, one of the largest digital publishers in the country, recently announced a financial transaction that would take it public at a valuation of $1.5 billion, or about three times its annual revenue.

Springer has been actively pursuing deals in the United States as a way to expand its portfolio. The publisher has become particularly attracted to subscription-based news businesses. After Springer acquired Business Insider for around $500 million in 2015, it remade the company to become a subscription-based news outlet and put its scoops behind a paywall. (For that deal, Springer paid almost nine times Business Insider’s revenue.) Last year, the company acquired a controlling stake in Morning Brew, a newsletter publisher.

Politico’s subscription business made it an even more attractive target for Springer. The German publisher already had a partnership with Politico as a joint owner in Politico Europe. Springer had been looking to expand Politico Europe, but it couldn’t do so without Mr. Allbritton’s consent.

The Politico deal is expected to quash Springer’s talks to acquire Axios, a competing news start-up founded by Jim VandeHei, Mike Allen and Roy Schwartz, all early veterans of Politico. (Mr. VandeHei and John F. Harris started Politico in 2006 after they left The Washington Post.)

Mr. Allbritton has lost some of his biggest-name journalists in recent years, either to rivals or to upstarts. The media landscape has shifted substantially, and the so-called talent economy has allowed big-name journalists to start their own ventures. This year, three of Politico’s top staff members — Jake Sherman, Anna Palmer and John Bresnahan — left to start Punchbowl News, a competing news site. Mr. Sherman and Ms. Palmer were the well-known hands behind the Playbook newsletter.

In February, Politico’s chief executive announced he would depart, and in June, Carrie Budoff Brown, a longtime editor at Politico, said she would be leaving to join NBC News. Politico’s nearly 400 journalists are also in the throes of a unionizing effort that could severely add to the cost of the business. It’s unclear how Springer will manage the mounting labor issues.

For Mr. Allbritton, the deal means a huge personal payday. His family already netted about $500 million after Mr. Allbritton sold their television empire to Sinclair Broadcast Group in 2013.