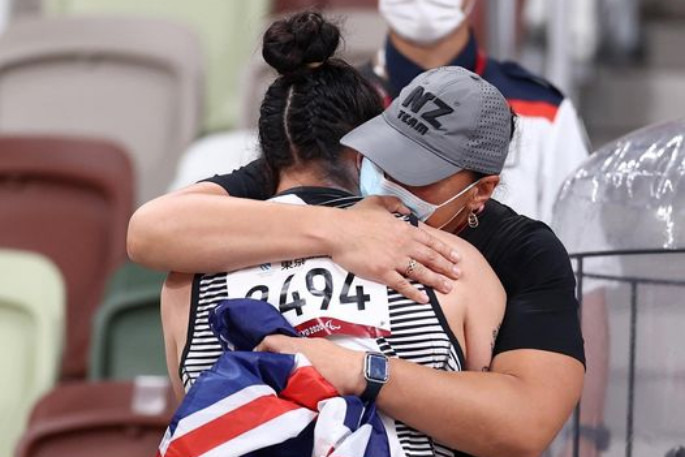 Four weeks after Dame Valerie Adams secured a bronze medal at the Olympics, Lisa Adams stood atop the podium after winning a gold medal in the women’s shot put F37 at the Paralympics on Saturday.

Lisa eased past her competition in her debut at the Games, setting a new Paralympic record of 15.12m in the Women’s Shot Put – F37 classification.

She was cheered on throughout the competition by Valerie; her sister, her coach and her biggest inspiration.

The 30-year-old Lisa, who has cerebral palsy, obliterated the Paralympics record with two throws of 15.12 metres.

“I am in the best physical form I’ve been in, but I was having fun.

“I was smiling, you know my coach told me to just go out here and enjoy it because we had done all the work, and that’s what I did, I had a really fun time out there, it was so amazing.

“And the support from my coach and the crowd, and just our little crew that are allowed to be here, it was amazing.”

“I’m late to this sport, but when I started Tokyo was the dream and my sister, my coach, helped me turn that into a goal,” she told Stuff prior to the Paralympics.

Lisa, who hails from Rotorua, was the heavy favourite to win the gold medal Paralympics debut in Tokyo.

Her personal best of 15.50m was more than two metres better than her nearest rival in the field of eight athletes.

Lisa laid down the gauntlet by breaking the Paralympic record with her opening throw, hurling the shot 14.36m.

It turned out she was just warming up.

She was the only thrower to go beyond 14 metres and broke the Paralympic record four times.

All six of her throws went further than China’s Mi Na who won the silver medal with a best effort of 13.69m.

Lisa was overcome with emotion when she knew she was guaranteed gold.

She draped herself in the New Zealand flag and went over and celebrated the biggest result of her career with her sister.

“During the playing of our anthem it was just reflecting, and I was so emotional about it, because it’s been so special, so hard, so rewarding,” says Lisa, “but I felt very supported and loved you know, and I was really, really proud to do this for Aotearoa and our little team of five mil.

“It’s cool. It’s trippy to think that we’re here doing the stuff we love during this pandemic, but I’m so grateful that we can do this here as safe as we can. It’s mean, it’s like a dream come true.”