Start every business day with our analyses of the most pressing developments affecting markets today, alongside a curated selection of our latest and most important insights on the global economy.

As a patchwork of reporting frameworks has long kept environmental, social, and governance (ESG) data uneven, new regulation is set to both revolutionize and streamline the sustainability landscape worldwide—with Europe leading the charge.

With expansive change on the horizon, global players will need to learn the new rules of the game quickly. Analysts interviewed by S&P Global Market Intelligence believe that these new European standards, coupled with global decarbonization efforts, will heighten investors’ interest in and engagement with sustainable finance.

More than $3 trillion of public and private firms headquartered outside the EU are likely to be affected by the SFDR, which on March 10 began mandating that asset managers, pension funds, and insurers disclose how ESG risks are considered in their investment decisions, according to an S&P Global Sustainable1 analysis.

“The SFDR has a simple objective: avoid the ‘greenwashing’ of financial products and financial advice in the EU by providing more sustainability-related information,” David Henry Doyle, head government affairs and public policy for EMEA at S&P Global, said in a recent commentary. “The impact of the SFDR will be significant in terms of additional disclosure. This may include developing and communicating new processes and procedures for entities affected by its requirements. It will also likely catalyze strategic choices on how to approach sustainability as a firm. Finally, SFDR will unleash a flood of new sustainability information for investors to interpret. An often-expressed concern is the availability of relevant corporate data that feeds into these disclosures by financial market participants. In many ways, the impact of the SFDR revolution is just beginning.”

The EU’s push to create a go-to European standard for green bonds, announced on July 6, is likely to create a unified taxonomy and boost issuance in the region, yet simultaneously risks facing limited uptake among international issuers, according to S&P Global Sustainable1.

As the largest market for green bonds worldwide—with $53.4 billion sold in Europe during the second quarter, pushing first-half global issuance to $202.09 billion, according to the Climate Bonds Initiative non-profit—Europe’s market is set to swell as the EU prepares for an additional €1 trillion in sustainable investment over the next 10 years under its Green Deal. Likewise, many companies in Europe, the U.S., and elsewhere are turning to sustainability-linked loans, which don’t hold restrictions on how their proceeds can be used, to raise funds and finance new projects.

While pioneering, the EU’s taxonomy regulations that determine how sustainable a sector or business is comes with challenges. An S&P Global Sustainable1 analysis found that 69% of the revenues generated by the 1,200 largest global companies, in addition to approximately 73% of revenues generated by the U.S.’s 500 largest companies, were not aligned with the EU taxonomy. The European Banking Authority found that the majority of the region’s banks aren’t yet prepared to report in line with the taxonomy, with just one-third currently in scope.

“Fighting climate change has become a top priority for European governments and policymakers. The financial sector will be instrumental in facilitating the transition to low- or zero-carbon economies now targeted by policymakers, but the transition itself could pose financial and operational risks for these firms,” S&P Global Ratings said in a recent report. “Regulators are using scenario analysis, stress tests, and other tools to assess the financial sector’s vulnerability to climate change, foster higher disclosure, and encourage banks to embed environmental risks in their strategy and risk management. Despite some methodological limitations and significant data quality challenges, this forward-thinking approach and willingness to challenge banks should support the effective institutional framework in which European banks operate.”

Today is Wednesday, August 18, 2021, and here is today’s essential intelligence.

Uncertainty in the Global Economy 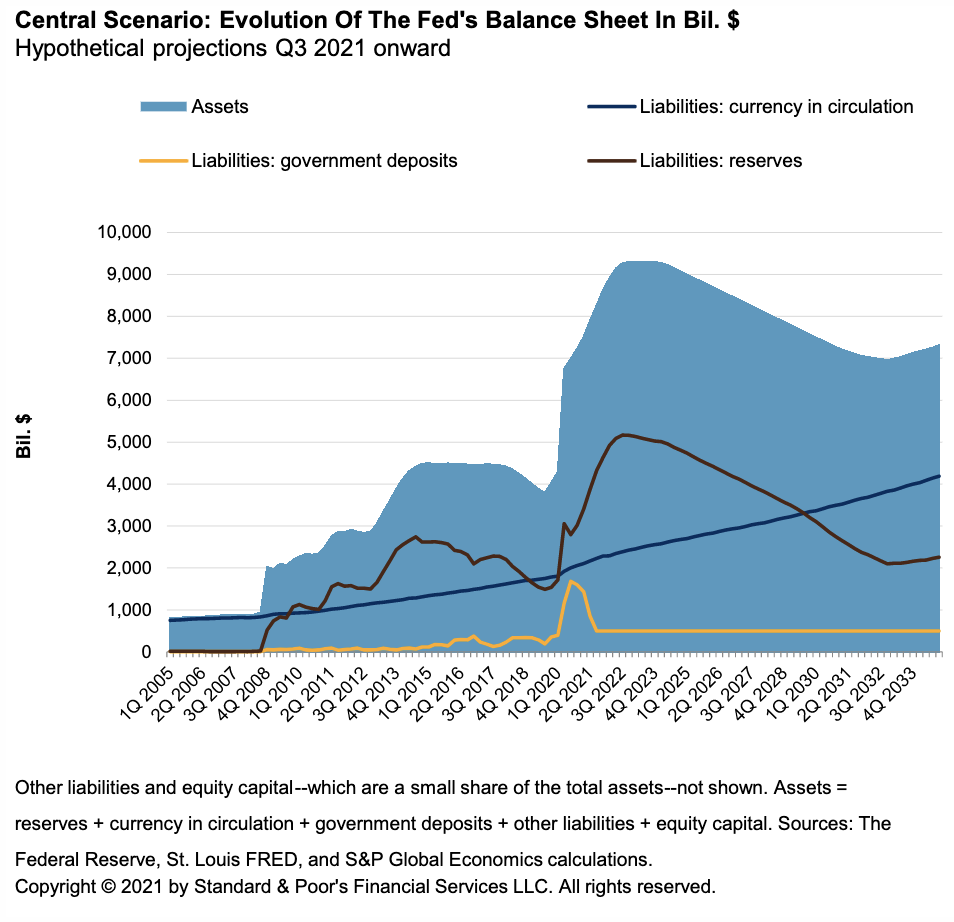 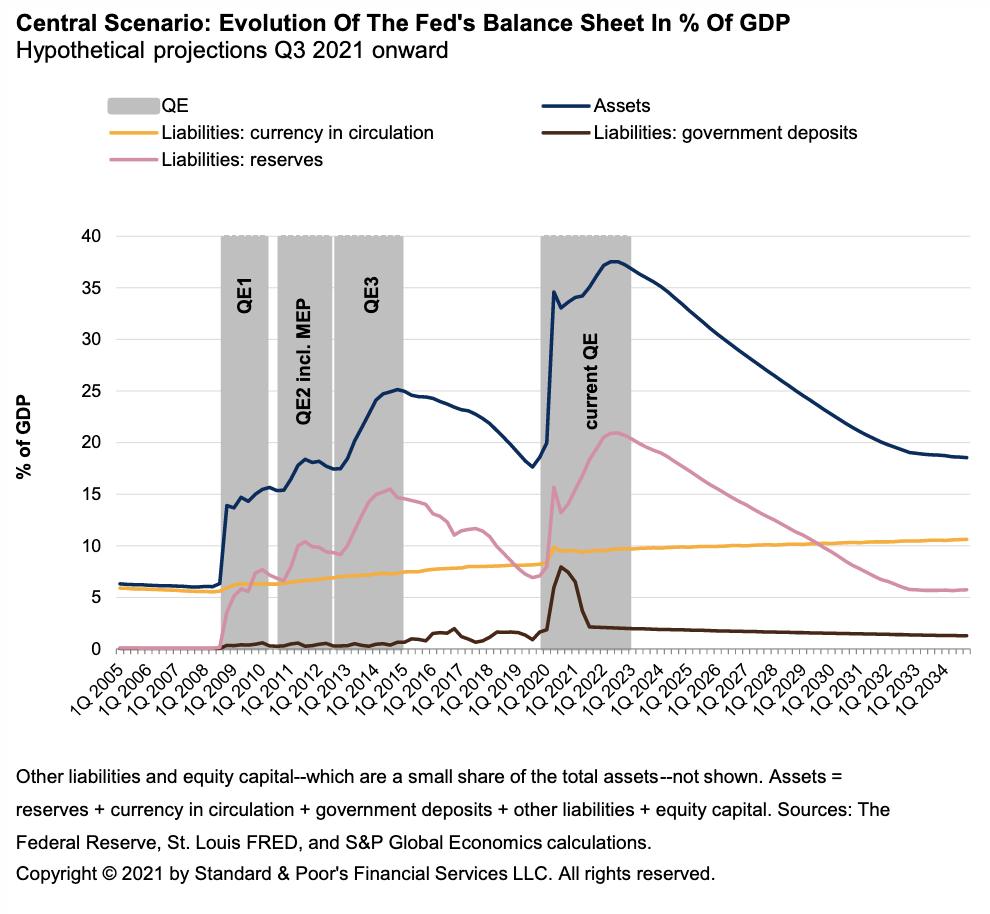 As the economic recovery from the COVID-19 pandemic continues to gain pace, the focus of monetary policy has shifted from cushioning the downside risks toward eventual normalization. This includes the timeline for asset purchases or quantitative easing (QE). The Fed has communicated that the time to commence tapering of its asset purchases is drawing near and that, when completed, policy rate liftoff will follow once maximum employment is reached (provided that inflation remains well-behaved). The monetary policy discussion to date has largely ignored the balance sheet, which ballooned to $8.2 trillion at the end of July 2021 following $4 trillion of additional asset purchases during the pandemic. An additional $1 trillion-$1.5 trillion of QE is possible before tapering is (presumably) complete late next year. S&P Global Economics estimates that in a moderate scenario, unwinding of QE-related asset and bank reserves could stretch to over a decade after tapering is complete, and in a plausible but aggressive asset rolloff scenario, it could take about five years.

The price of gold has dropped in recent months after hitting record highs in 2020. CPM Group Managing Partner Jeffrey Christian, a gold market expert, recently spoke with S&P Global Market Intelligence about the outlook on precious metals and the potential for further price declines. 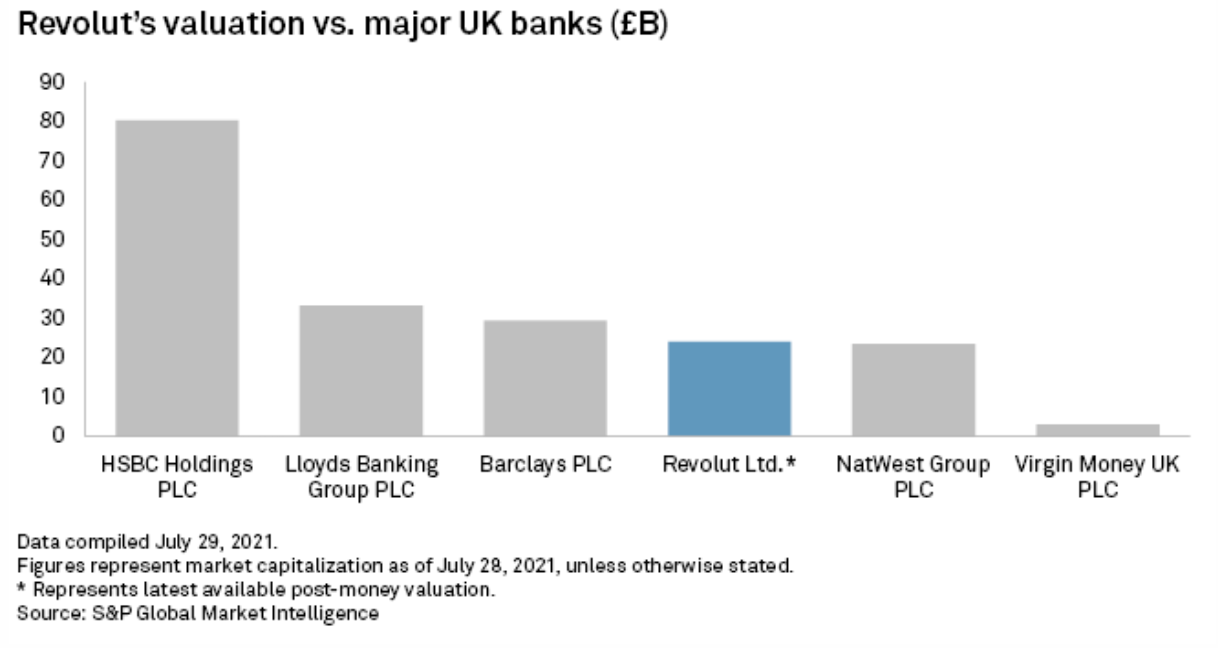 Online banking services provider Revolut cemented its position as the U.K.’s most valuable fintech in July following a $800 million funding round led by SoftBank Corp. and Tiger Global Management LLC. It now has a higher market value than NatWest Group PLC, the high street lender with roughly £775 billion of assets. Industry experts say that while there are signs of overexuberance in some parts of the market, the surge in fintech investment is underpinned by solid fundamentals, such as a major shift toward digital banking, payments and e-commerce, that have been amplified by the pandemic.

Amid union protests Spain’s banks have cut jobs and closed branches, but further restructuring and associated costs await. Four of the country’s largest lenders have reached agreements with trade unions on large-scale job cuts. CaixaBank SA said in July it was cutting 14.5% of its workforce as part of its merger with Bankia SA. Meanwhile, Banco Santander SA, Banco de Sabadell SA and Banco Bilbao Vizcaya Argentaria SA have reached similar deals. The Spanish banking industry as a whole cut 4% of its jobs and closed 10% of its branches in the first half of 2021, according to Europa Press. 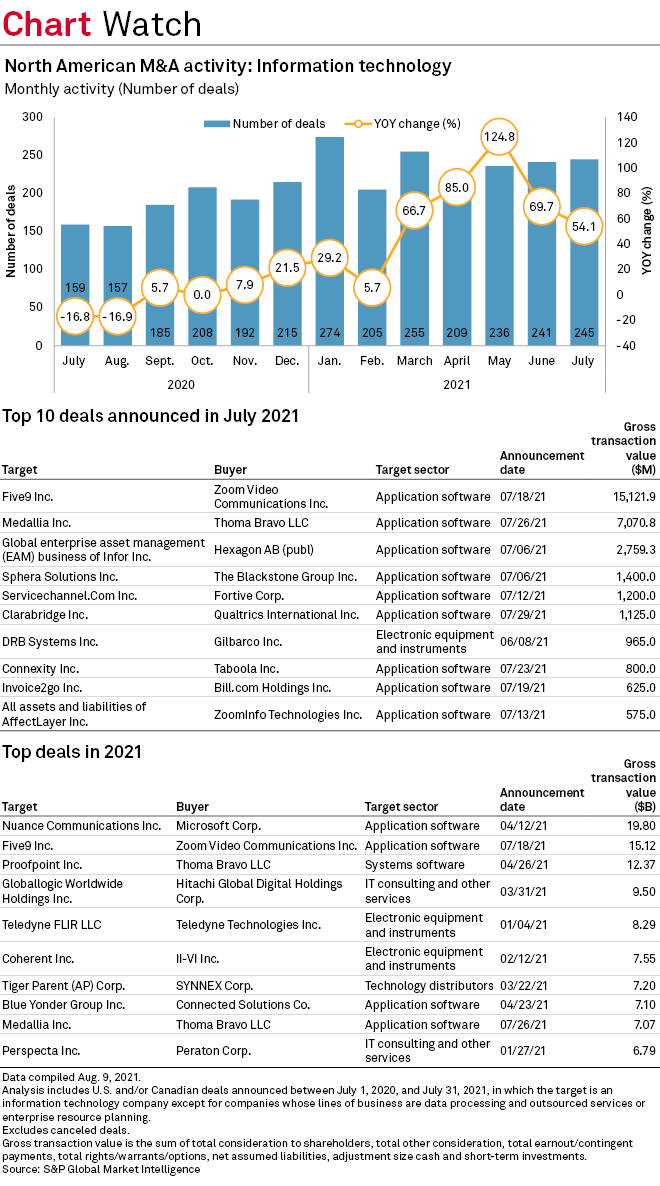 Deal activity in the information technology space just keeps ticking up, and so do the multiples being paid. Across tech and telecommunications, there were 2,326 transactions announced in the first seven months of 2021, compared to 2,154 deals announced in the same period in 2019, according to 451 Research, an offering of S&P Global Market Intelligence. Transaction values have skyrocketed well above pre-pandemic levels, with the total deal value landing at $758.61 billion for the year through July 2021 compared to just $294.42 billion for the same period 2019, according to 451.

China’s internet consumer companies have caught the attention of debt investors. They are cash-rich, growing fast, and pouring resources into new consumer businesses. One such area is community group buying—a relatively new retail model. Some internet companies have already drawn fire from regulators. The crackdown on car-hailing giant Didi Global Inc. is but one example. S&P Global Ratings believes most rated issuers have the financial headroom to offset the investment and regulatory risks that will likely persist. In S&P Global Ratings’ view, these companies have strong market positions, potential for growth in their niche segments, and an ability to monetize their user bases and data. This will be crucial to maintaining credit quality.

Credit FAQ: The Canadian Telecom Sector Is At Its Financial Bandwidth Limit Amid Spectrum Investments And M&A

On July 23, 2021, Canadian telecom companies completed bidding for new wireless spectrum licenses in the 3.5 GHz band. The spectrum auction, run by Innovation, Science and Economic Development (ISED) Canada, resulted in C$8.9 billion in aggregate bids for the 3.5 GHz radio spectrum, which was about 2x our expectation. S&P Global Ratings had expected about C$4.5 billion in aggregate spending, with the Big-3 Canadian telecom providers—BCE Inc. (or Bell Canada), Rogers Communications Inc., and Telus Corp.—investing about C$3.0 million-C$3.5 billion. The approximately C$3.28 MHz-PoP (average) valuation paid by the Big-3 also exceeded all previous valuations and was much higher than we have seen in other jurisdictions.

ESG in the Time of COVID-19

Ahead of London International Shipping Week 2021, a six-part S&P Global Platts podcast miniseries looks into the pricing of alternative marine fuels for the global shipping industry. In each episode of Marine Fuels of the Future, Platts editors investigate the current state of the major fuel alternatives, as the shipping sector seeks to reduce its greenhouse gas emissions ahead of stringent caps in 2030 and 2050. In episode two, S&P Global Platts look at biofuels – a diverse energy source derived from vegetable oils and waste matter, rather than from traditional hydrocarbons.

—Listen and subscribe to Platts Future Energy, a podcast from S&P Global Platts

The UK government’s hydrogen strategy, published Aug. 17, will give the market confidence, industry leaders said, but details will be needed as soon as possible for companies to make investment decisions on project feasibility. The strategy reinforces the government’s aim of developing 5-GW of low-carbon hydrogen by 2030, and launches consultations on market structure, carbon intensity measures and blending hydrogen into gas grids, as well as indicating roles for hydrogen in industry and transport.

Denmark has opened a consultation with industry on future green hydrogen prices with a scenario seeing costs around Eur2/kg ($2.36/kg) by 2030, Energinet.dk said Aug. 17. The state-owned gas and power grid operator is calling for industry insight by Sept. 3 to qualify its assumptions used in models and analyses to expand the energy system of the future, it said.

Singapore’s carbon market, expected to launch by the end of 2021, could potentially play a vital role in overhauling the voluntary carbon market, which is fragmented and often criticized for not being robust enough to meet what is a lofty goal – to cap the world’s CO2 emissions.

The Future of Energy & Commodities 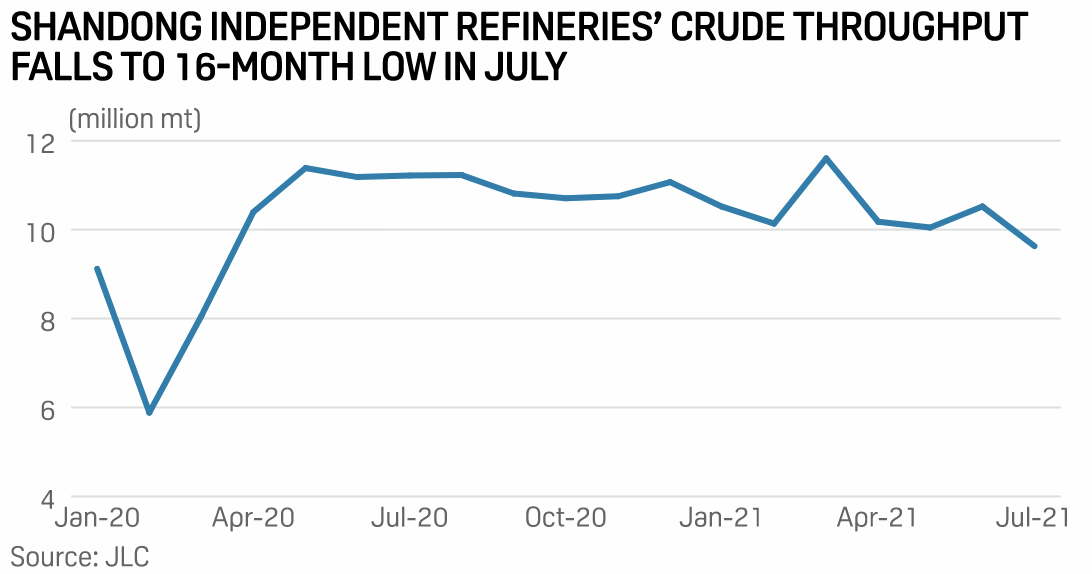 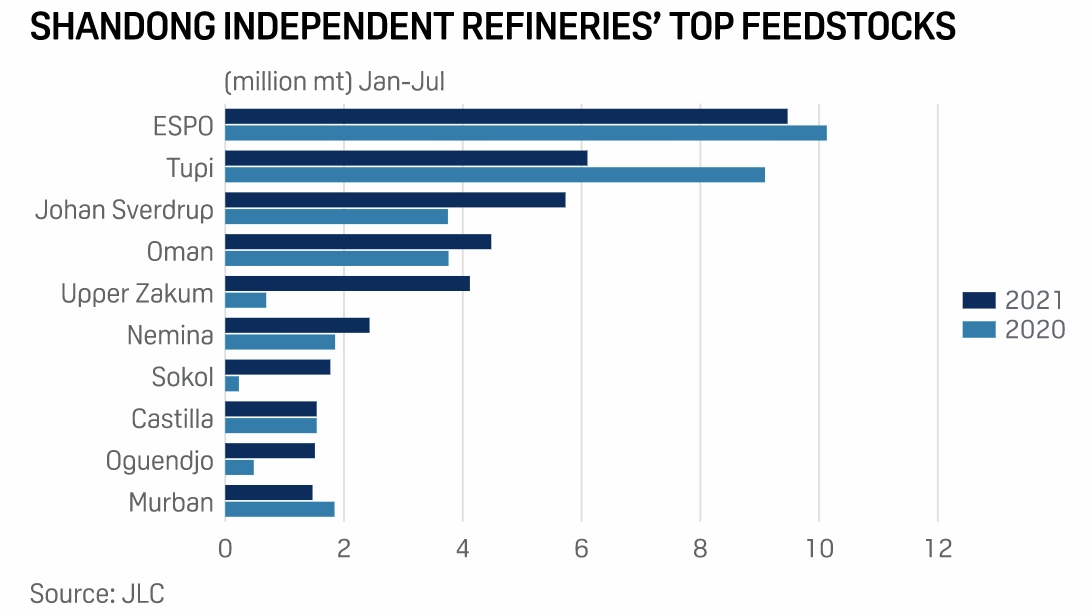 Feedstock throughput at China’s independent refineries in the eastern Shandong province fell to a 16-month low in July amid maintenance by some key refiners, pulling down runs that were already under pressure due to weak refining margins, limited export quotas and government crackdowns.

Australia’s competition watchdog said on Aug. 17 that east coast LNG producers will need to step up their efforts to ensure the domestic market is adequately supplied or the region could face gas supply shortfalls by as soon as 2022.

Written and compiled by Molly Mintz.