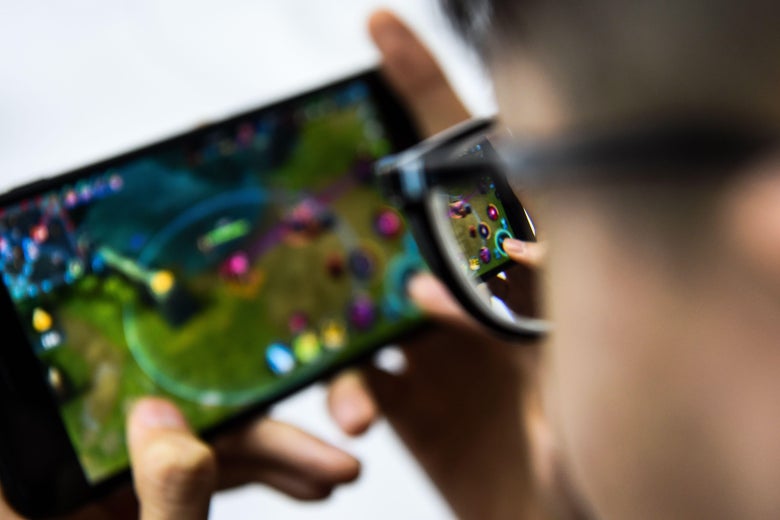 China has twice as many gamers as the U.S. has people—some 700 million of them. That ubiquity, especially among young people, has worried China’s central government. So at the start of this month, it banned people under 18 from playing video games for more than three hours a week. They could only play from 8 to 9 p.m. on Friday, Saturday, and Sunday nights.

But it’s not just video games. The government has gone after tutoring companies and big tech players in this “season of crackdowns,” in an attempt to bring these sectors more in line with what they perceive as socialist values and to strengthen control over Chinese society and the Chinese economy.

On Friday’s episode of What Next: TBD, I spoke with Brenda Goh, who covers technology in China for Reuters, about how China’s gaming curbs are just the opening salvo in a fight to reshape its youth culture and the internet.

Lizzie O’Leary: Before these restrictions started, who was playing video games? Are these rich kids, are they poor kids?

Brenda Goh: It’s everybody. This whole concern over video games and young people in China goes back quite a few years. There used to be quite negative media coverage of these internet addiction camps in China. Around 2017–18 there were more complaints in society about video game addiction and also rising cases of near-sightedness. That’s kind of when China started talking about curbing the video game industry.

What kind of games are we talking about? I know there’s one called Honor of Kings that’s really popular.

They’re sort of  multiplayer Battle Royale–type of games. Honor of Kings is very similar to League of Legends, which is very well known in the West. These are games where you essentially need to be online the whole time, and you need to work with other players, strategize, fight with other clans, protect your territory. It’s not a game that has a start and finish. It goes on for as long as you play it.

This makes me wonder about these increasing restrictions that the central government put on gaming over the years. How did teens react?

These time restrictions aren’t new. There were already time restrictions that were put in place in 2019 that only allowed young kids to play less than an hour-and-a-half on weekdays and three hours on weekends. The thing is that even though there were these restrictions in place, China’s video game market is still the largest in the world.

The latest gaming curbs are getting a lot of news coverage, maybe in part because Western parents read about them and think they sound kind of appealing, but they fit into this broader attempt by China’s central government to change the way teens live. One thing the government has targeted is online fan culture.

When we talk about fan culture in China, we’re talking about this growth of an industry where you have these massive fan clubs that band behind celebrities in China. I guess it’s not that dissimilar to fan cultures elsewhere, but what the government has been really getting unhappy about is that they say that it’s causing a lot of internet disorder.

So for example, on social media, they say that they see fan clubs attacking each other on China’s version of Twitter. Some talent shows, in order to vote for the contestant you want to see win, you actually have to buy products in order to cast your vote. So there was a big scandal a couple of months ago where fans of this show were filmed wasting a lot of milk. They were buying milk that was from a sponsor of the show, but then throwing it down the drain. So it was seen as oh, this is very wasteful. It’s these sort of behaviors that the Chinese government took note of.

In August, China’s internet regulator banned platforms from publishing lists that ranked celebrities, because kids were spending hours online trying to game the rankings and then fighting with other fan groups. The government also regulated merchandise sales. Those moves came after another crackdown on the $120 billion online tutoring industry where kids were getting extra help in school, often from Americans and other Westerners.

That move took everybody by surprise. It’s very expensive to bring up a child in China. So when the government did this, it was seen very much as they want to reduce the amount of stress both parents and children are under.

It sounds both like it’s about lowering stress, but also maybe lowering some inequality between the families that can pay for this kind of tutoring and those who can’t.

There has been some skepticism about whether the changes, especially their private tutoring policy, could have an adverse negative effect. For example, when it was first announced, after getting over their disbelief, a lot of parents started going out to look for private tutors. So whether some of this would go into the gray market, that was one of the big questions that people had.

Can you identify any one moment or event that launched the crackdowns on these sectors and the video game curb in particular?

The video game curbs came out last month, but China’s technology sector has been under pressure since late last year. You could say that the starting gun for this season of regulatory crackdown was when they blocked the Ant Group initial public offering.

That was going to be the world’s biggest IPO, and it was blocked. And from then, regulators in China signaled that they are going to be much tougher on technology companies. We saw numerous fines. We saw punishments, companies being called out for infringing consumer rights, building up monopolies in certain areas. So the video game curb follows all of that.

When you look at the share prices of these companies, recently they’ve fallen kind of dramatically. It also feels a little bit like the central government is maybe trying to scale back some of their growth. And I wonder if you think there is a recognition that some of the runaway economic growth of the past 15 years in China had real downsides. Is this just about technology and video games, or is it about trying to find a more sustainable economic model?

I think what the Chinese government has been saying is that they recognize that there has been some excesses or some bad practices that have resulted of the growth of these technology companies. For example, they’re really concerned about data because a lot of these technology companies, they know everything about you, because we rely on Alibaba’s and Tencent’s apps and other tech companies’ apps to manage our everyday lives in China. So the government is worried about consumer rights.

There’s also concern about the treatment of gig workers in China. China relies a lot on delivery men. It’s very quick to get something delivered. And over the years, that’s been a great growth driver, but at the same time, there’s been increasing recognition that a lot of these workers don’t have the basic protections like insurance. They don’t have adequate rest periods.

You know, a lot of these regulatory curves are frankly, things that I think Western governments would like to impose on their tech companies as well.

A lot of the discussions that we’re having here, it’s not things that in the U.S. or in Europe are unheard of. For example, in the U.S. and Europe, there’s a lot of chatter as well about regulating the gig economy companies. And China has been doing it here as well. So it’s quite fascinating to look at the global regulatory picture right now and see how that’s progressing in different parts of the world.

Is it possible to look at these changes and get a sense of what the central government—or Xi Jinping in particular—want for China in the next decade? Or is that oversimplifying?

What they’ve been saying a lot is how they want to bring culture, bring the economy, bring these companies back to socialist values. China already has pretty strict censorship policies where things that are on the internet that are seen to violate socialist values are censored pretty quickly.

I wonder what a socialist internet looks like. That’s such a fascinating way of thinking about it. What could that model actually end up being?

They recently put out a document with guidelines for the development of what they call a “civilized internet” or “civilized cyberspace.” What they outlined in that document was stronger control over content, that influencers should be dealt with, model workers and model citizens in China should be further highlighted. The internet should be used to better spread socialist values. There is a vision for what the internet should be like from Beijing.