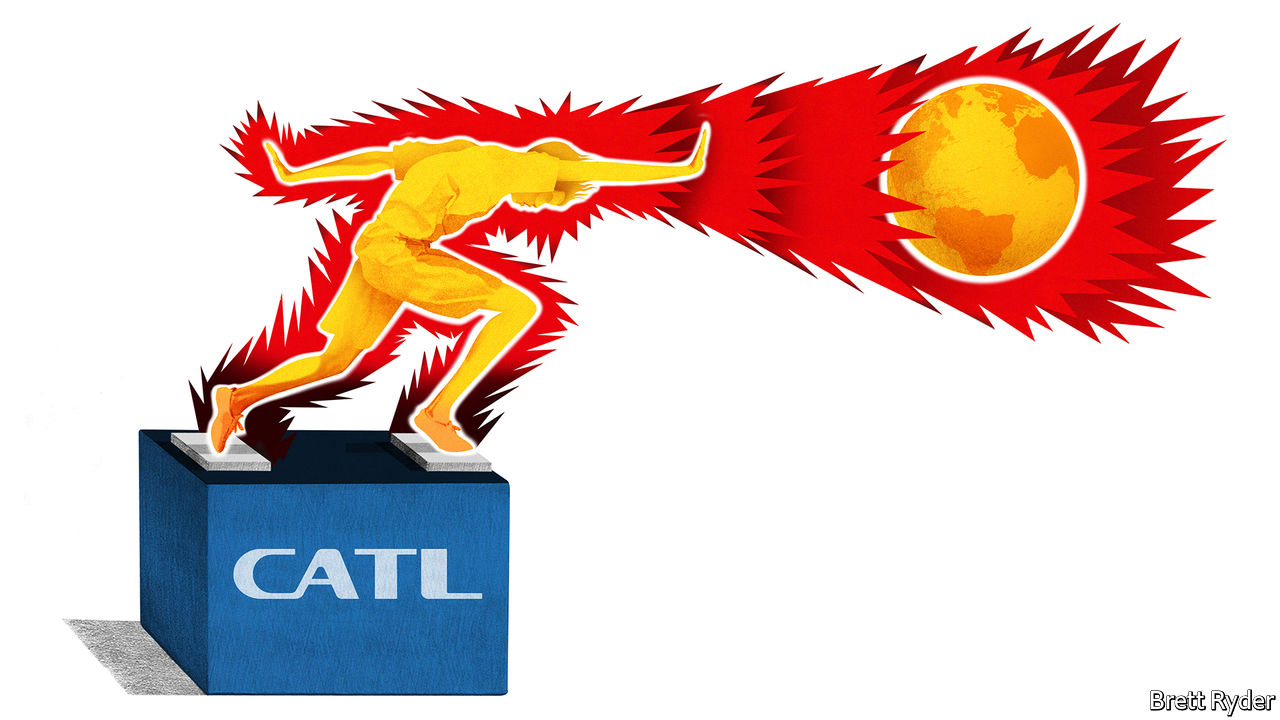 IN AMERICA, IF you want to dominate an industry, you channel your inner Elon Musk and shout about it. But CATL, the Chinese company that makes batteries for some of Mr Musk’s Tesla electric vehicles (EVs), is different. When your columnist first contacted it in 2017, the brush-off was swift. “We want to concentrate on our products only and do not accept any interviews at present.” These days it is only marginally less blunt. “Unfortunately, we are sorry that it’s hard for us to arrange [interviews] at the moment.” The temptation is to give it a dose of its own medicine and ignore it.

Enjoy more audio and podcasts on iOS or Android.

And yet in 2017 the firm, founded only six years earlier as Contemporary Amperex Technology Ltd, vaulted from being the world’s third-largest battery-maker to its biggest. It has since reached a market value of 1.3trn yuan ($200bn), more than the second, third and fourth producers—South Korea’s LG Chem, Japan’s Panasonic, and China’s BYD—combined. In recent days its rising share price has made its 53-year-old founder, Zeng Yuqun, richer than Jack Ma, a much-better-known Chinese tech baron. Given Mr Ma’s blackballing by the Chinese government, for Mr Zeng to have kept his head down now looks shrewd.

The world will hear a lot more about CATL in the future. That is because one of the justifications for its high valuation is that it is about to move beyond the Chinese mainland, the world’s biggest EV market where it accounts for about half of lithium-ion-battery sales, to Europe, Indonesia and possibly even America. Its profitability far exceeds that of its global peers. Its technology has become at least as good as theirs, giving it the clout to outcompete them and contribute meaningfully to a worldwide clean-energy revolution. And yet it is also what Sam Jaffe of Cairn ERA, a battery consultancy, calls the “dreamchild” of China’s government-industrial complex. That makes it a potential flashpoint in the torrid world of technology geopolitics.

CATL’s low profile starts with its provenance. Mr Zeng created it in the backwater of Ningde, a subtropical city better known for tea than tech, in Fujian province where he grew up in a hillside village. But he has long had high ambitions. In 1999 he founded Amperex Technology Ltd (ATL), a maker of lithium-ion batteries for portable devices, which he sold to TDK, a Japanese firm, in 2005. One of his big clients was Apple, maker of the iPhone.

Seeing the potential for EV batteries, which China was keen to turn into a strategic industry, Mr Zeng led a spin off from ATL in 2011, severing links with its Japanese parent company—possibly to please the Chinese authorities, says Mark Newman, a battery executive who formerly covered the company as an investment analyst. When it listed in 2018, CATL had a small percentage of direct and indirect state ownership. More important, the government had its back. For years China used subsidies to favour domestically produced batteries for electric cars and buses, kneecapping South Korean competitors such as LG Chem and Samsung SDI. CATL, one of two top-tier Chinese producers, benefited most. The other, BYD, made cars as well as batteries. For that reason, many rival carmakers in China—including foreigners such as Tesla and BMW—gave it a wide berth and turned to Mr Zeng instead.

It is unfair, however, to ascribe CATL’s success purely to economic nationalism. According to James Frith of BloombergNEF, a consultancy, when CATL was faced with the winding down of subsidies in 2019, it quickly leapfrogged its South Korean rivals to produce the latest high-nickel batteries, which run for longer than the cheaper lithium-iron-phosphate ones that had been China’s staple. Chinese carmakers are bolder than their Western counterparts (apart from Tesla) in adopting innovative chemistry, he adds, which gives CATL more freedom to experiment. It also gets more for its investment in China than rivals do elsewhere and has a cheaper workforce, which makes its operating margins, just shy of 15%, the best in the business. Strong profits provide more cash to invest in expansion. Neil Beveridge of Bernstein, an investment firm, expects its capacity roughly to quadruple to 500 gigawatt-hours (GWh) of battery cells a year by 2025. That is an amount similar to what is promised from all of the world’s gigafactories today. Only Mr Musk sets more outlandish targets.

Zeng and the art of market-share maintenance

Most of CATL’s expansion will come in China, where it has a growing export business. But by the end of this year it is also expected to start production at its first offshore factory, with capacity of 14GWh in Erfurt, Germany, from where it will supply carmakers like BMW, Volkswagen and Daimler. Its move overseas appears to be motivated by a desire to retain its market leadership as EV sales outside China accelerate. Its South Korean and Japanese rivals have a bigger global presence. Simon Moores, a battery consultant, thinks a subsequent step will be into America.

Yet energy—even the clean stuff—is dirty business, muddied by geopolitical rivalries and economic jingoism. There are already fears in the West that CATL’s profitability in China will enable it to offer cut-price products abroad, reopening wounds caused when China’s subsidised solar panels swept the world in the 2010s. Moreover, advanced batteries, like semiconductors, are increasingly discussed in terms of an arms race. Europe and America are offering big inducements for locally made batteries and adjacent supply chains in order to catch up with China. They see a strategic vulnerability in being too reliant on a Chinese supplier.

As a result, CATL will have to be clever. Already it has more alliances with global carmakers than any other battery firm; jointly building factories close to their operations around the world would buy it political support. It will need to counter geopolitical paranoia by stressing the importance of cheap batteries, both for EVs and clean-electricity grids, in the fight against climate change. More transparency wouldn’t go amiss, either. It is a fine line between being coy and acting as if it has something to hide. ■